Every week, we have alumni from East Middle School come back to join us for Michigan Makers.  They provide helpful leadership, ideas, and feedback to our group, and last week they demonstrated a new tool that they use to design their own games!  During their game design pitch, they showed off their flash prototype and demo-ed the unique functionality of the StencylWorks tool.  Needless to say, the whole group was excited to learn new ways to turn their game designs into a reality!

If you are interested in trying out this tool on your own, check out Stencyl or find more game design programs on our resources page! 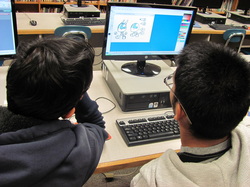 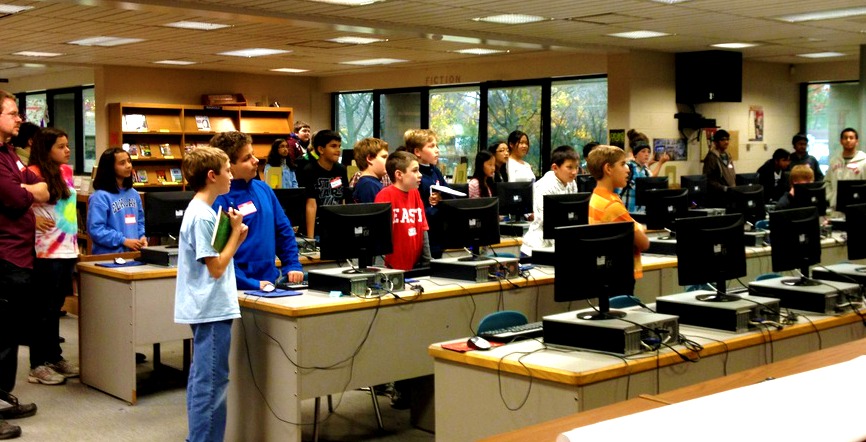 More exciting thoughts from our students!

Every time the Michigan Maker Mentors sit down to read our students’ reflections, we are amazed to see their growth and insight!  Here are a few more quotes from our students that were just begging to be shared!
This journal entry came from a week when the students were given free time to explore and hang out on their own:

“I learned about the potential aesthetic uses of conductive dough and its great versatility in creating circuits and machines.  In addition to this, I learned the symbolic notation used when creating circuits and schematics. The segment so far also motivated me to go out and do some independent learning  which led to my discoveries of resistance, voltage, Ohm’s law, Coulombs, and amperes, among various other electrical concepts.”

“So far, I have learned about how to make a board game. I’ve learned what makes people want to play a game. We made our own game with cardboard. We learned that when you have an idea, it makes so much sense in your own brain, but it’s hard to explain it to others so that they understand it. I hope to learn how clay conducts electricity and in what ways you can use it.”

“I learned that there are more things than just ideas to games. There is also strategy and chance. It is very complicated to make a game. I also learned that teamwork helps in projects. If you do things yourself, it would be slower and less convenient. I always liked working alone because I am in charge, but working together is also good to.  I want to learn how clay conducts electricity and how to program computers. We are growing up where there is a lot of technology, so this is very important. Also, my parents are both engineers and I want to be one too. I see them using computers a lot, so this should be helpful. I know I will not learn most of it, but I want to see how it works to see how I like it.”

“So far I have one thing in Michigan Makers that I have learned. I have the ideas people think of when making games.”

“I love the teachers and I like the things to do. I would like to have learned more about parallel and series. I would make a statue of liberty with eyes that light up. I learned that squishy circuits are awesome!”

The past few weeks we have been very busy!  We switched groups so that everyone who participated in one activity (either Game Design or Squishy Circuits) at the beginning of the year gets to try the other activity.  Last week we did the introductory groundwork lesson for each group, and next we will be moving on to more exploratory fun. Here are a couple photos of what we’ve been doing:

Reminder: No MM on November 6th!

This week is election day, so we will not meet.  We look forward to seeing everyone again on November 13!