We had quite the menu of options this week at Mitchell!

Along with the regular offerings of Lego, Kinex, Tinker Toys, and the junk box, we also brought back the Dash robots, Roominate, the Design Studio game, and Snap Circuits as well. 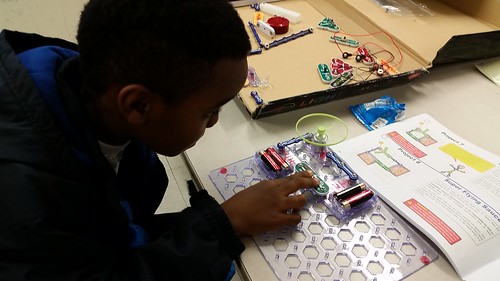 Powering a fan with Snap Circuits.

And, for the fans of Snap Circuits, we also brought a few littleBits kits this week. These kits include modules that snap together and allow kids (and adults!) to build a variety of projects as they learn about inputs, outputs, and circuits. 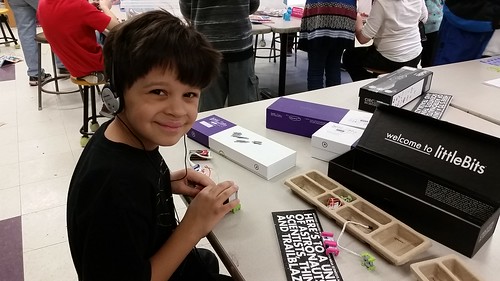 Trying out the littleBits Space Kit.

However, the most exciting activity this week was the debut of the 3D printer! 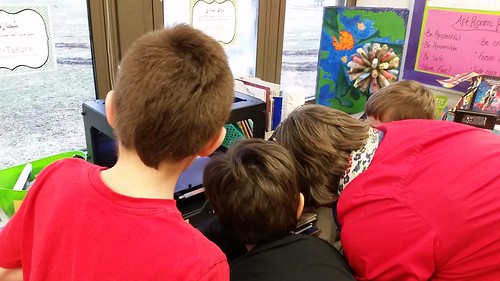 Kristin and I have seen the 3D printer operate a fair number of times, but watching the kids become entranced by the printing reminded us of how cool this technology really is to watch. Some kids spent the whole day today just watching the printer chug along! 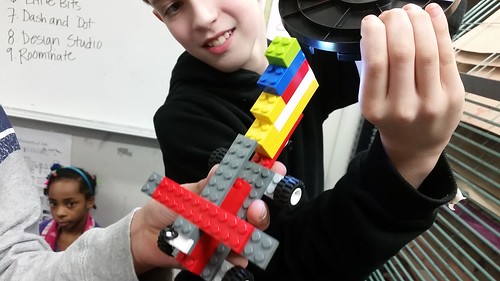 We are really looking forward to future weeks, and hoping we can give everyone the opportunity to create something of their own using the 3D printer.

Another successful week of Michigan Makers!

New today were our always popular Dash robots, a design and prototyping game called Design Studio, as well as Roominate, a building set which also lets you set up lights and motors to control different aspects of your creation. We also brought some new Snap Circuits kits since that was such a popular activity last week. 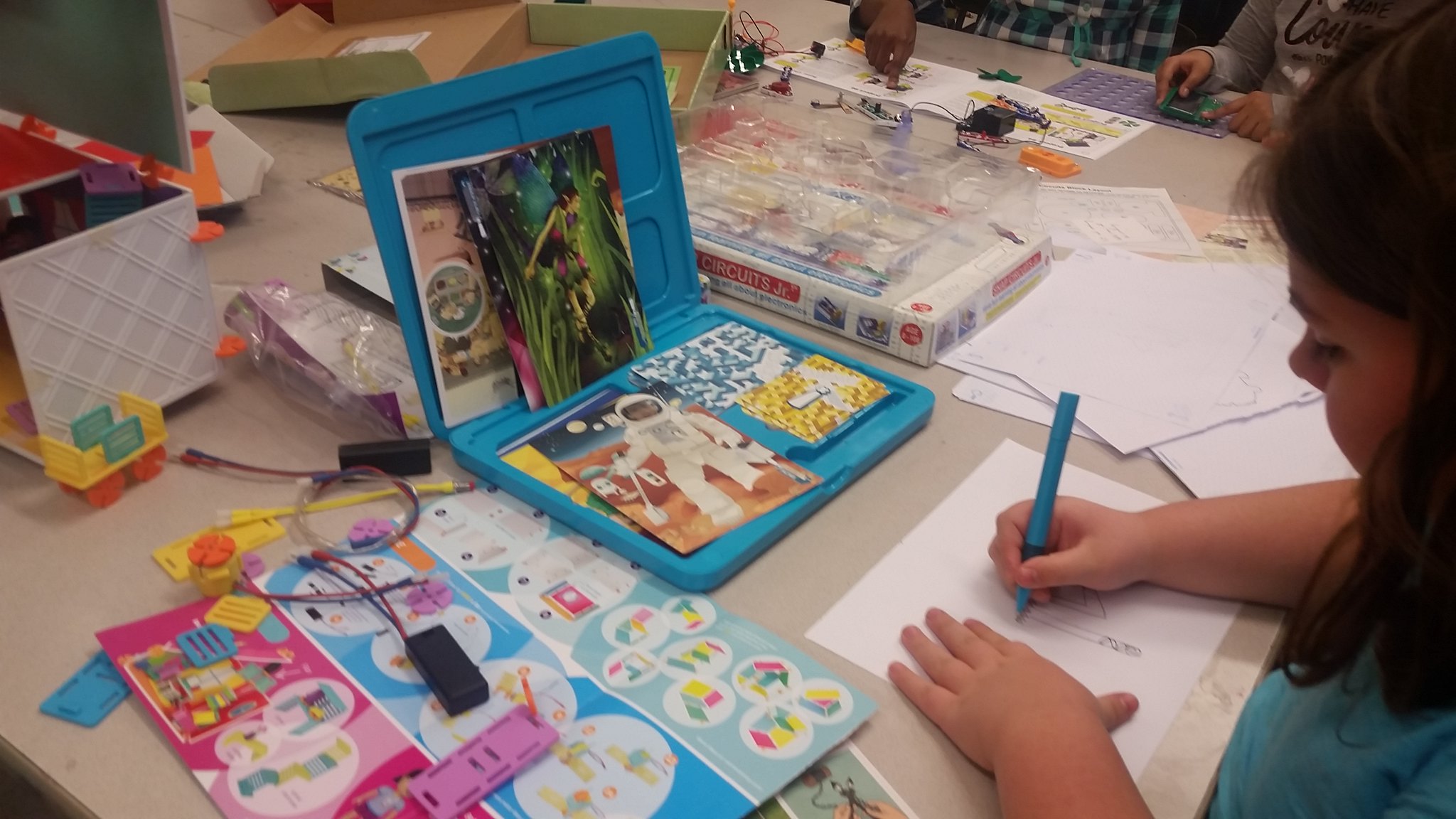 The junk box, Lego, Kinex, and Tinker Toys made a reappearance to round out today’s menu. And this week, we had two more family members volunteer, which made a huge difference for Kristin and me! 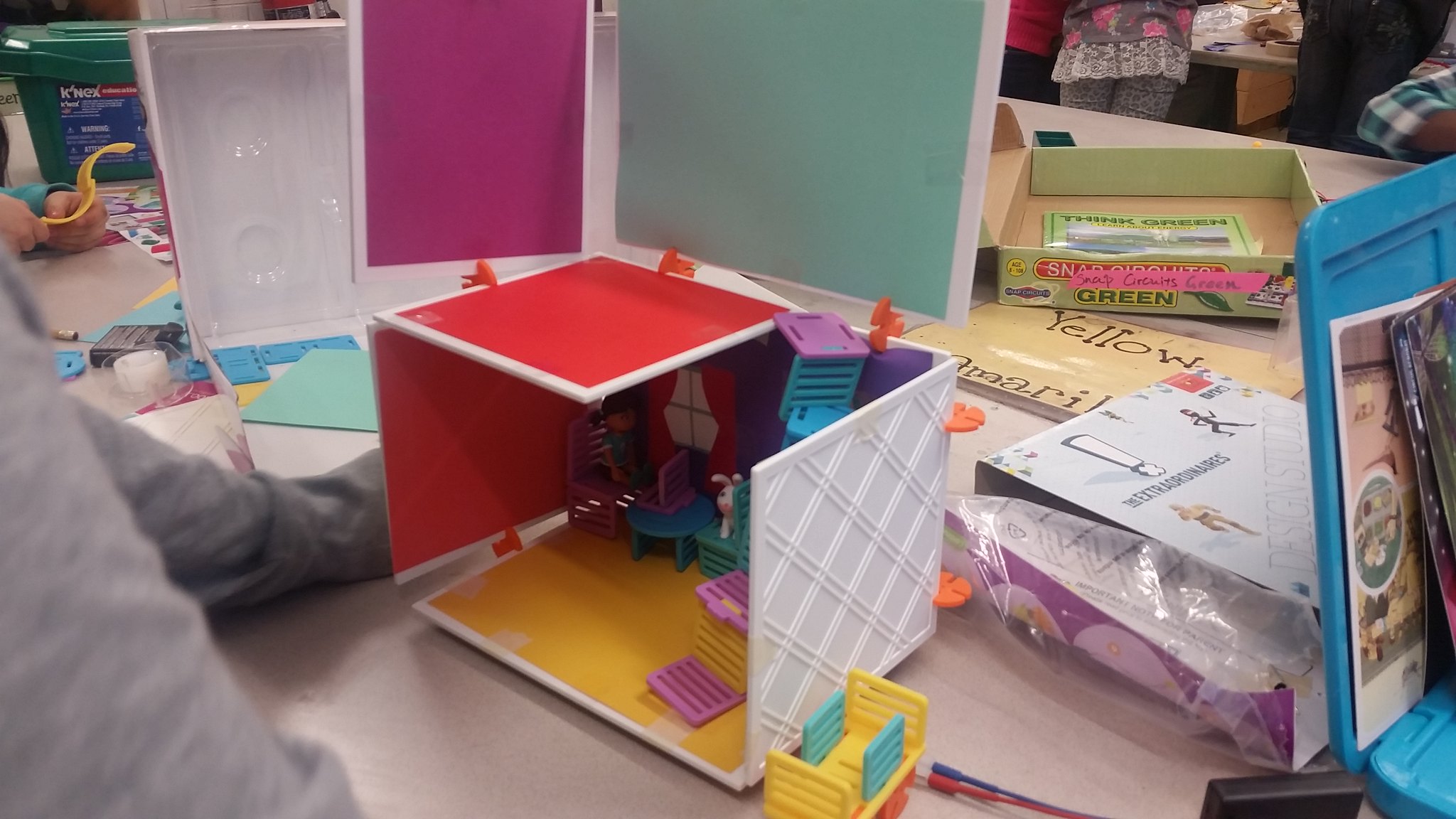 A few girls were the first to explore using our Roominate kit and were able to create a two-story house which they were working on furnishing and decorating, as well as exploring using some of the electronic components. 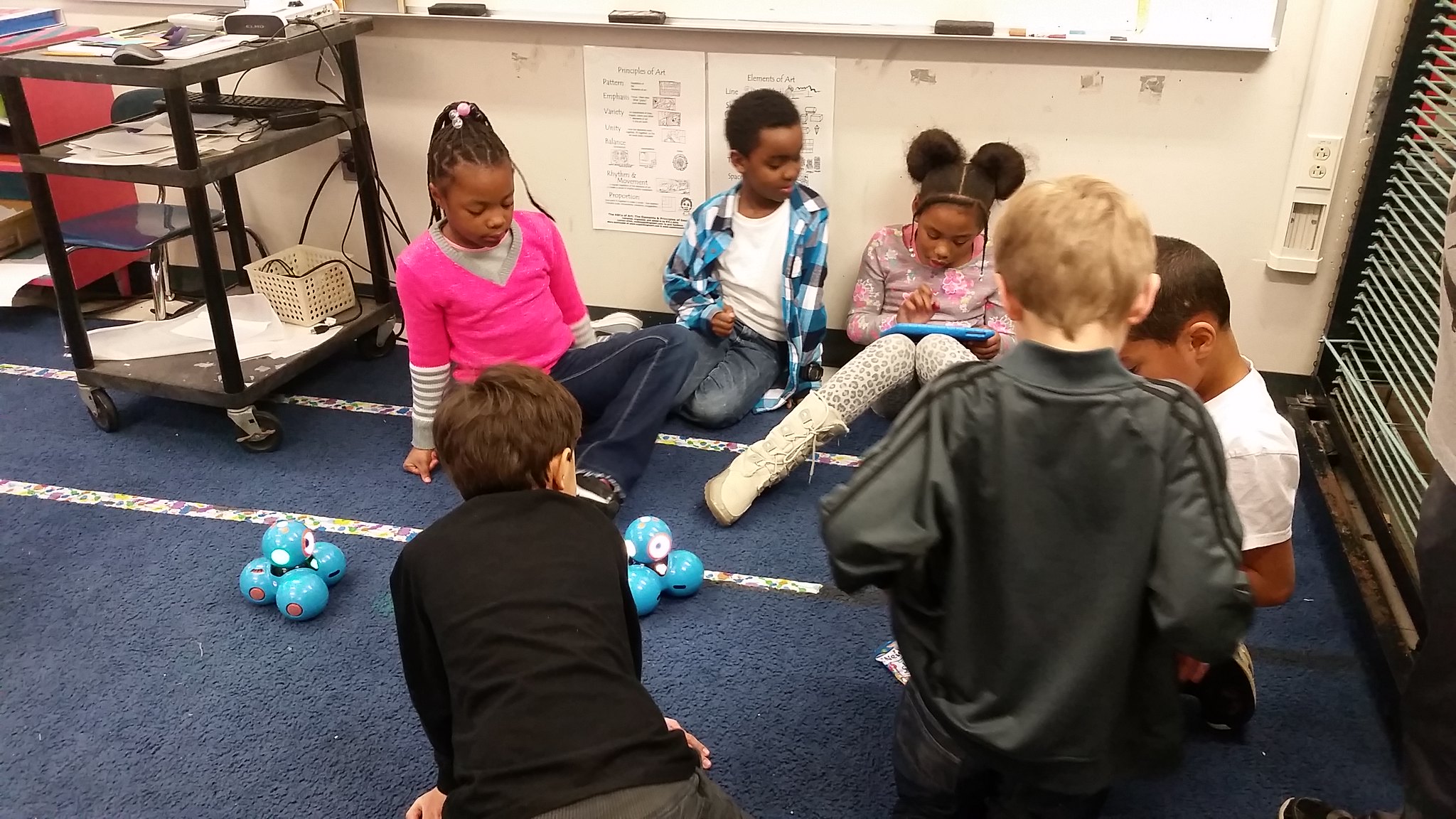 As usual, we had a flurry of interest in Dash and were glad that the kids were able to negotiate turns with each other so everyone who wanted to experience the robots today was able to have a chance. 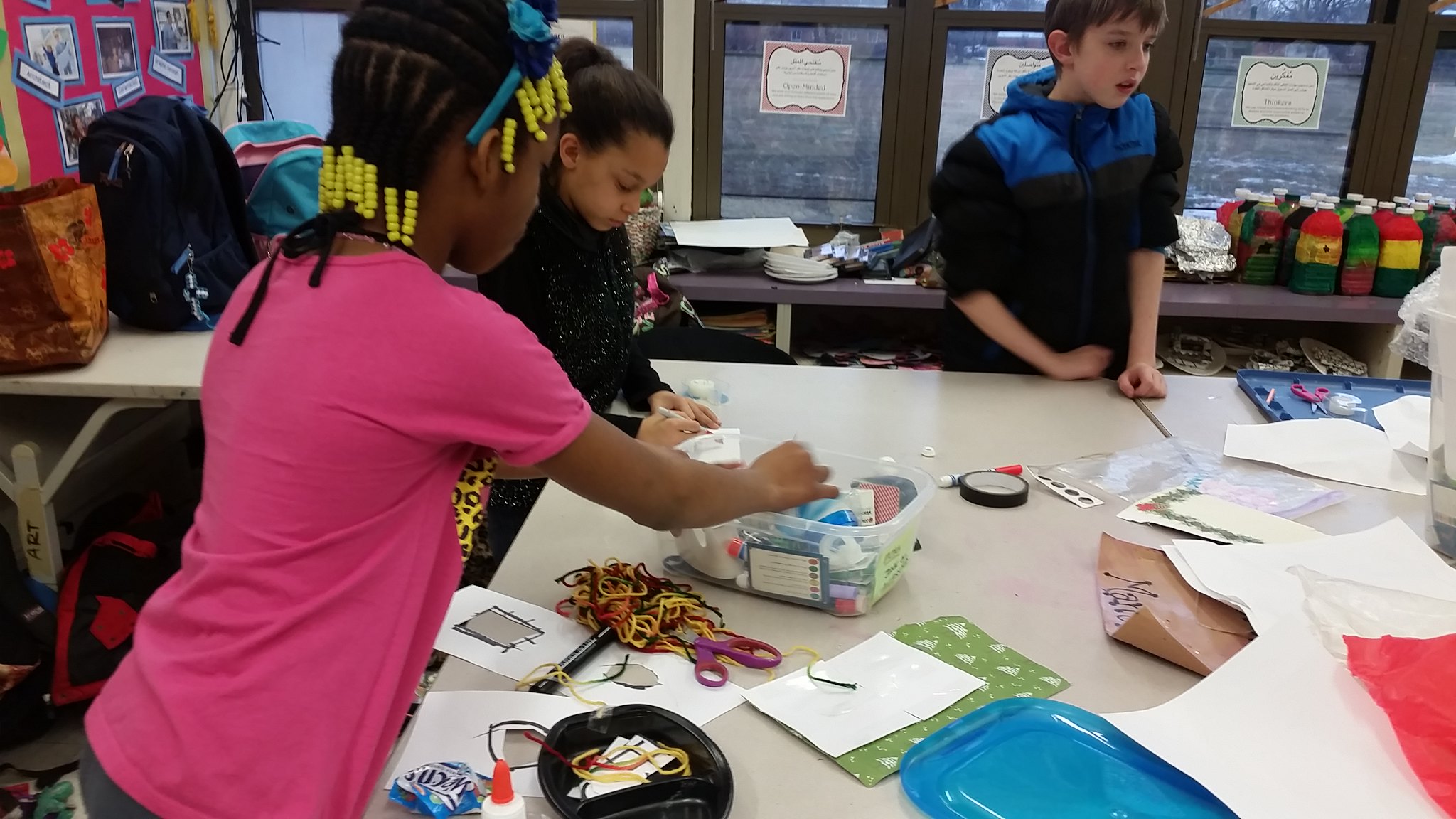 Snap Circuits was a success again this week, with two girls creating a project that let them recharge a battery by winding a crank and regulating the voltage output.

The best part (for Kristin and I) was how well the kids cleaned up – they even cleaned up early, without being asked! We suspect this may be due to the positive influence of our excellent volunteers. 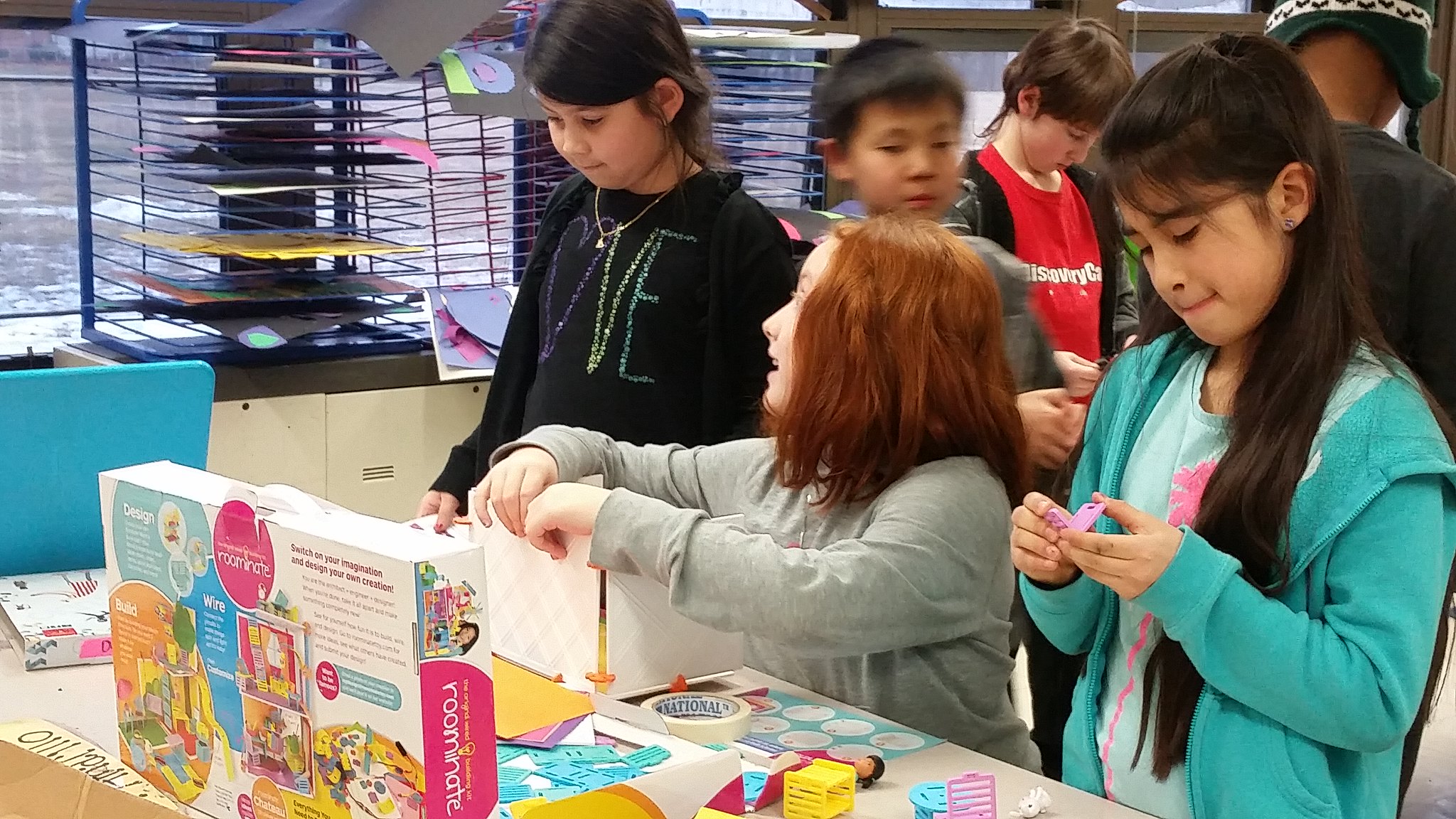 Keep tuned for future weeks – the 3D printer might even make an appearance at Mitchell one of these days!

Hi everyone! Kristin and I were very excited to start up Michigan Makers again, with lots of new faces, and a few of the same. 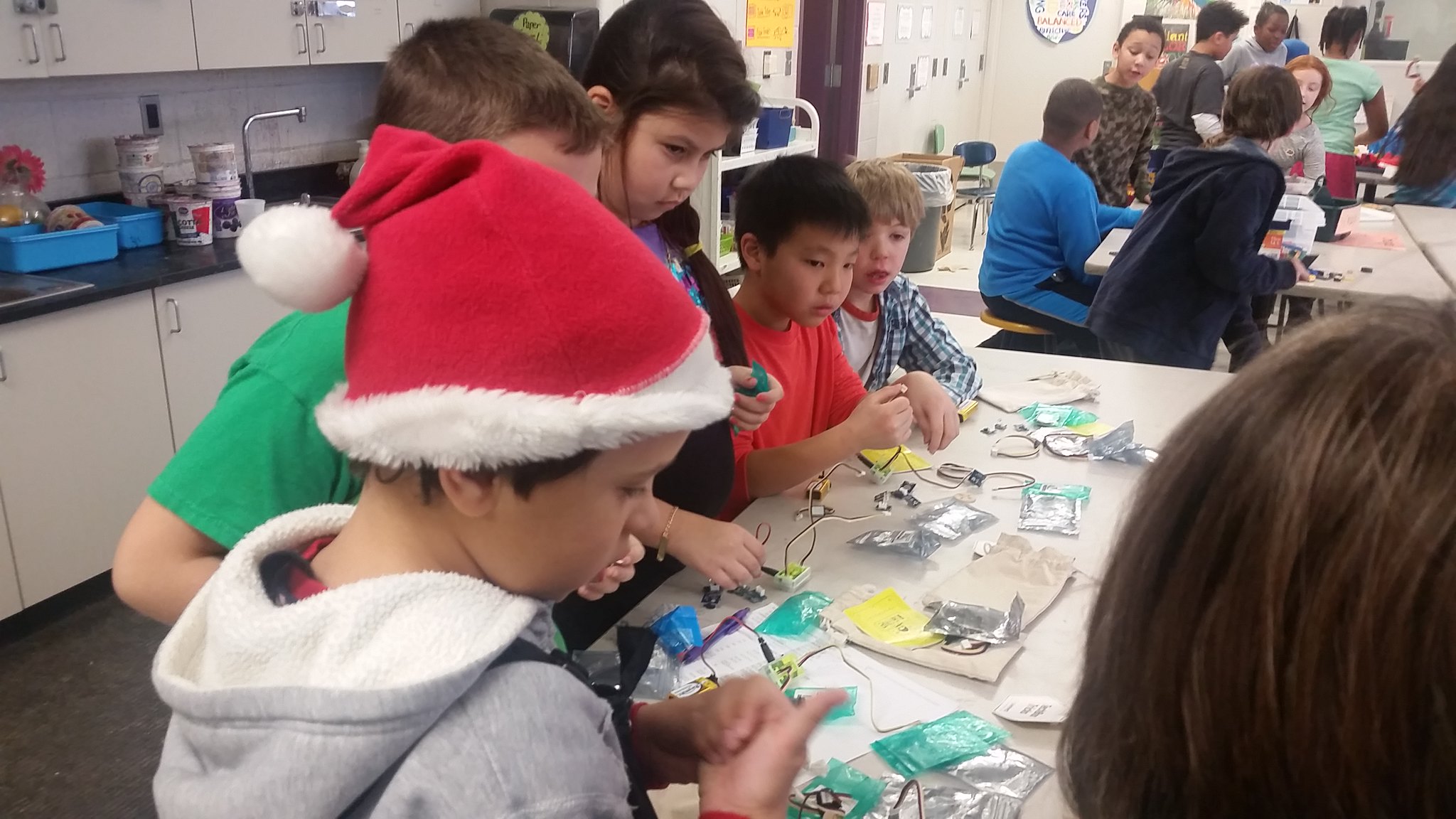 Tech Box Tricks made another appearance today, along with Snap Circuits, which were a newcomer this year. Snap Circuits come with a board and different circuit components which can snap together, helping to teach kids about how circuits work as they create a variety of cool projects exploring light, sound, and motion. We were also very fortunate to have a parent volunteer this week who helped to man this activity! 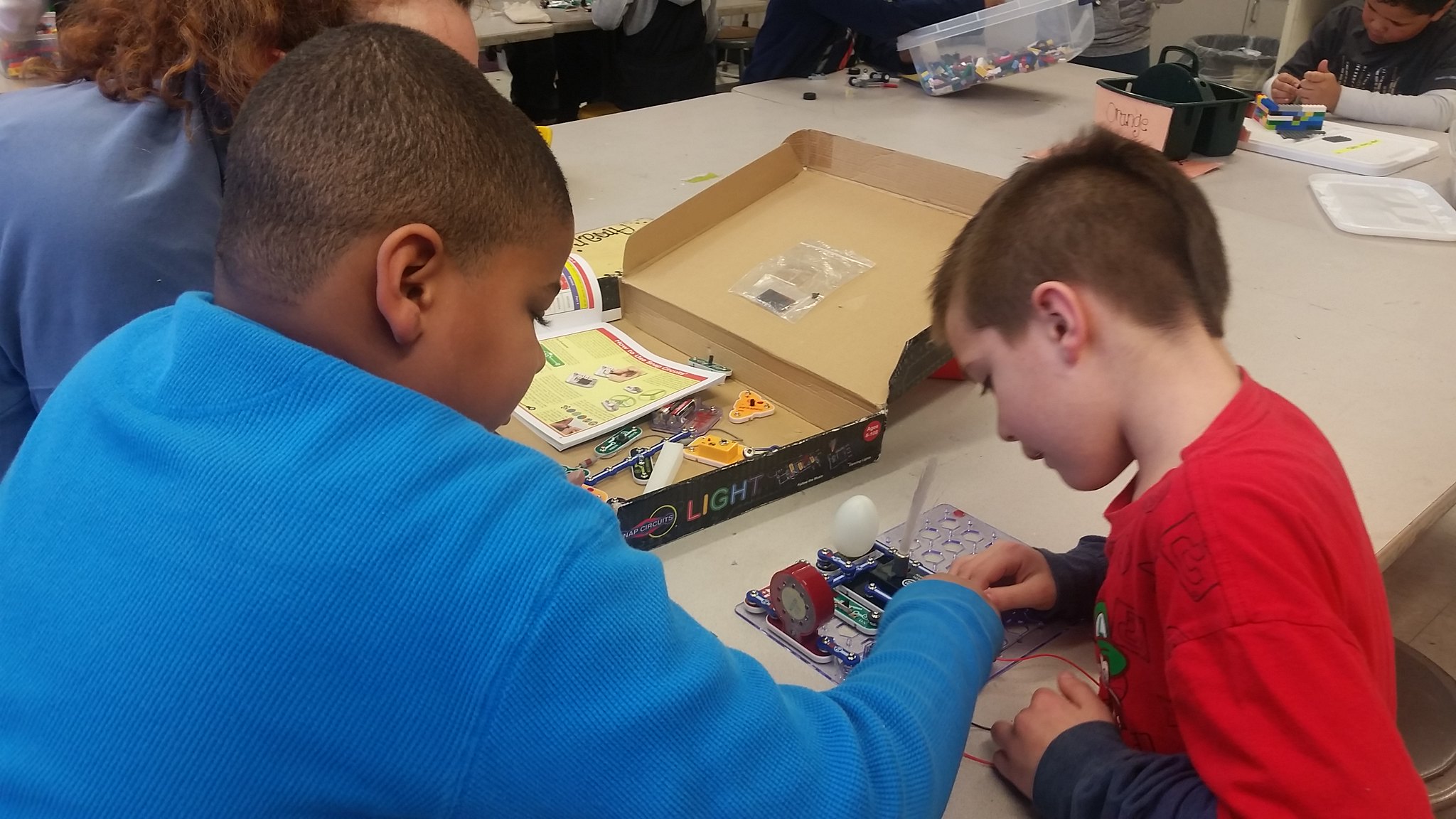 We also brought the ever-popular junk box as well as Kinex, Tinker Toys, Lego, and even the old classic –  Lincoln Logs. 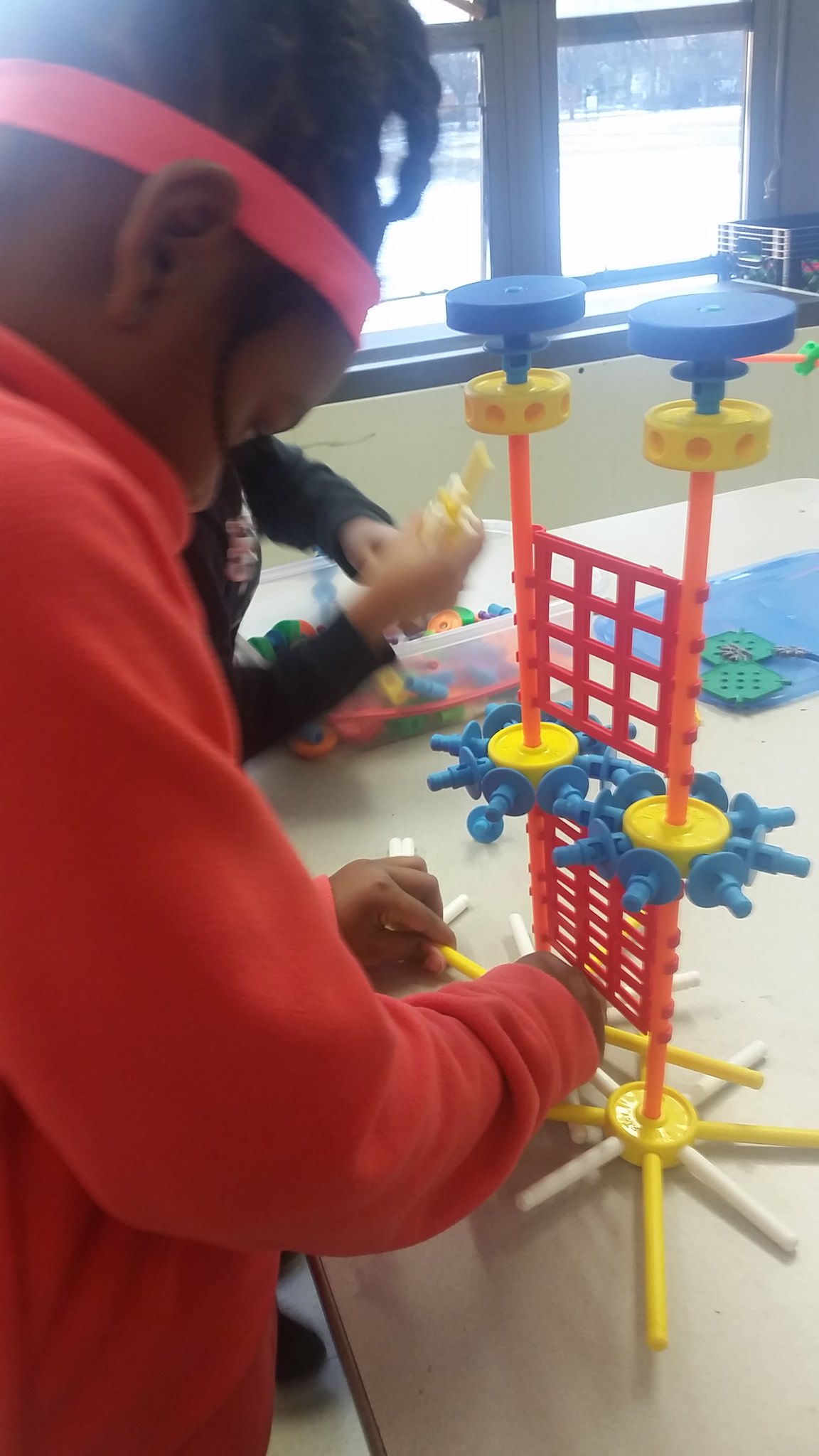 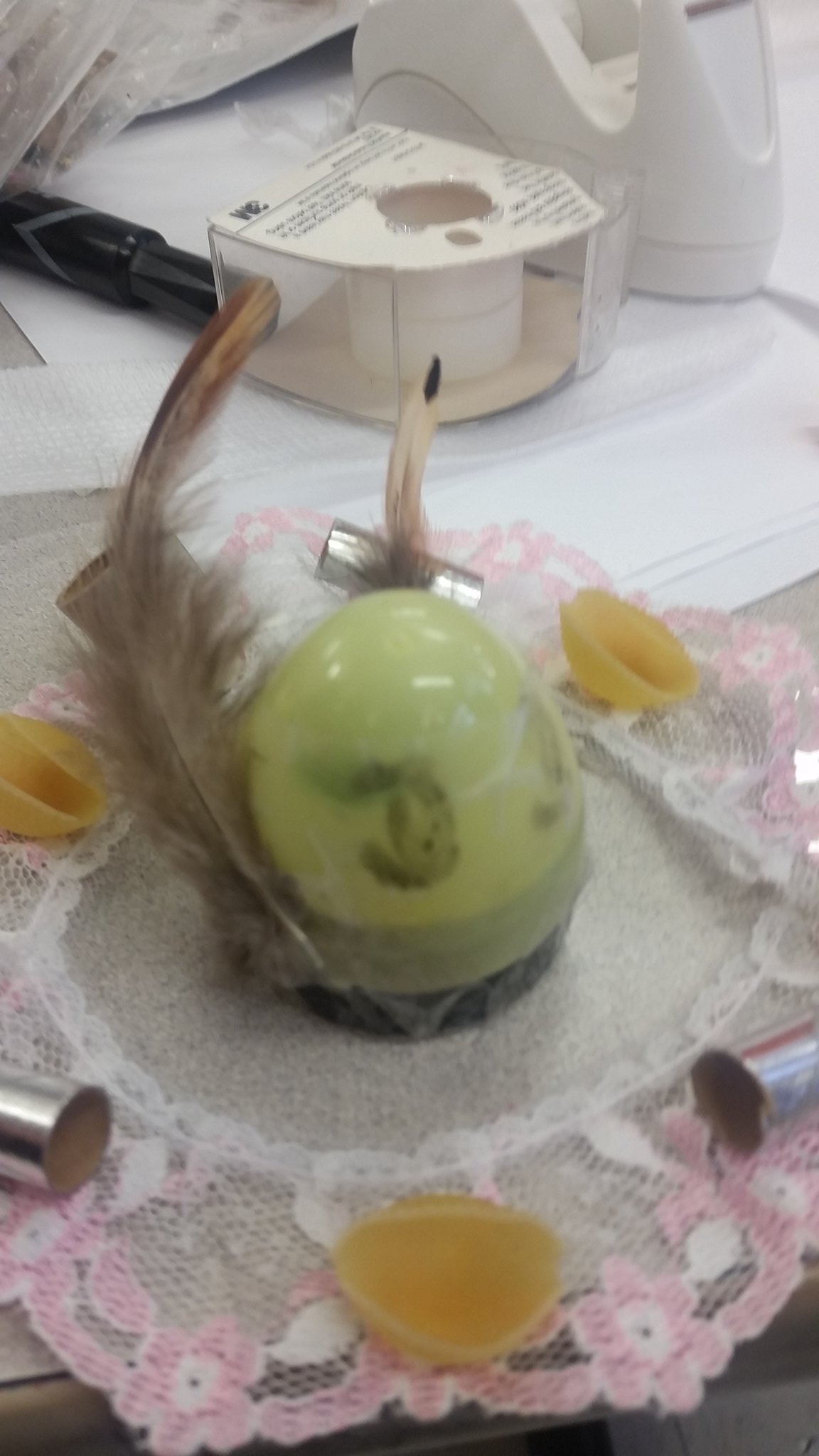 And what a successful first day back it was! We were very impressed by the enthusiasm and creativity of the group. There was a lot of creative use of materials in from the junk box, and some of the kids spent the whole time crafting their creations, despite having to share a single roll of tape after we ran out. 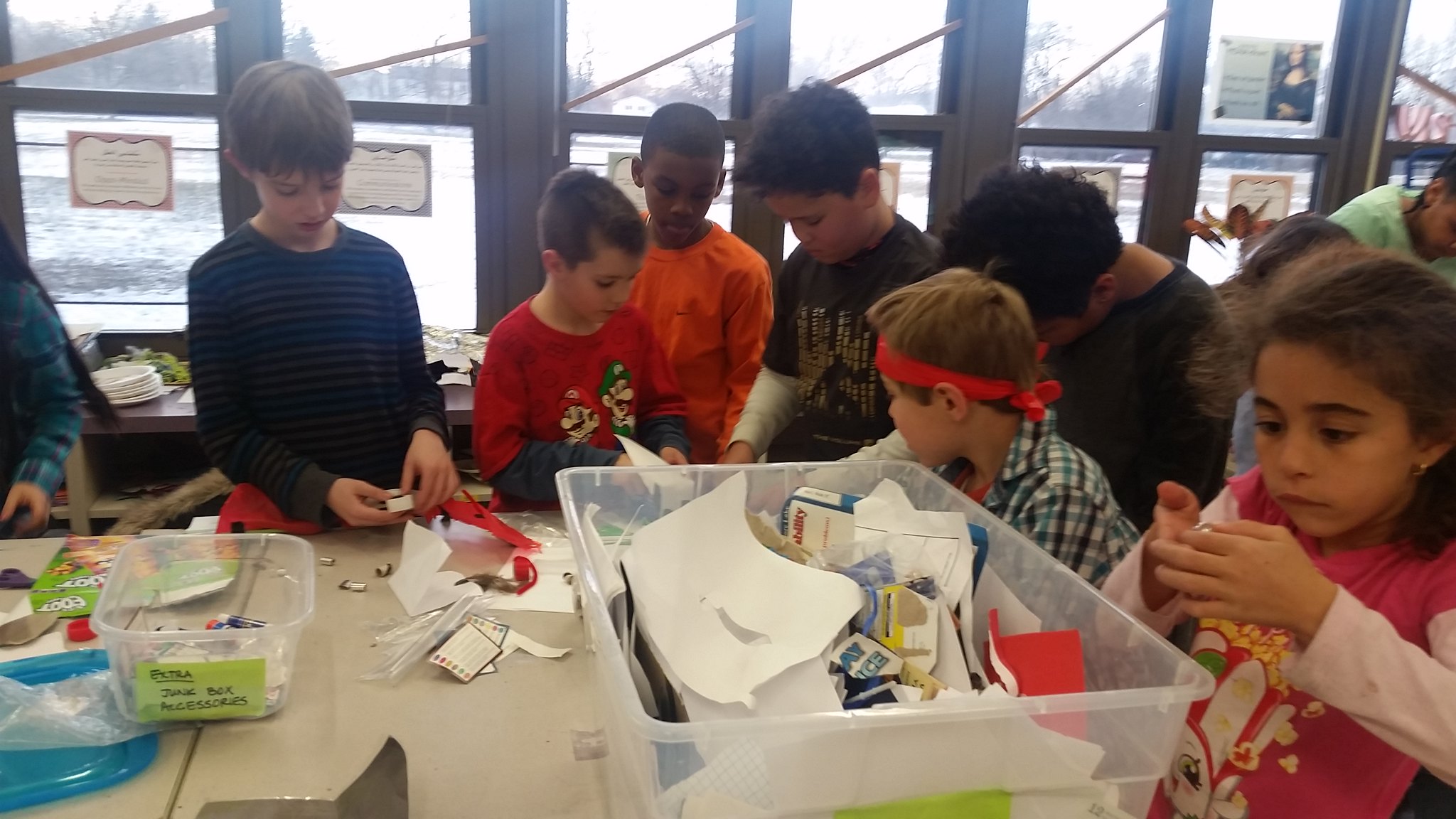 Some of the projects from today included a mask, a bird with flexible wings, a miniature table with dishes, and a golden snitch. 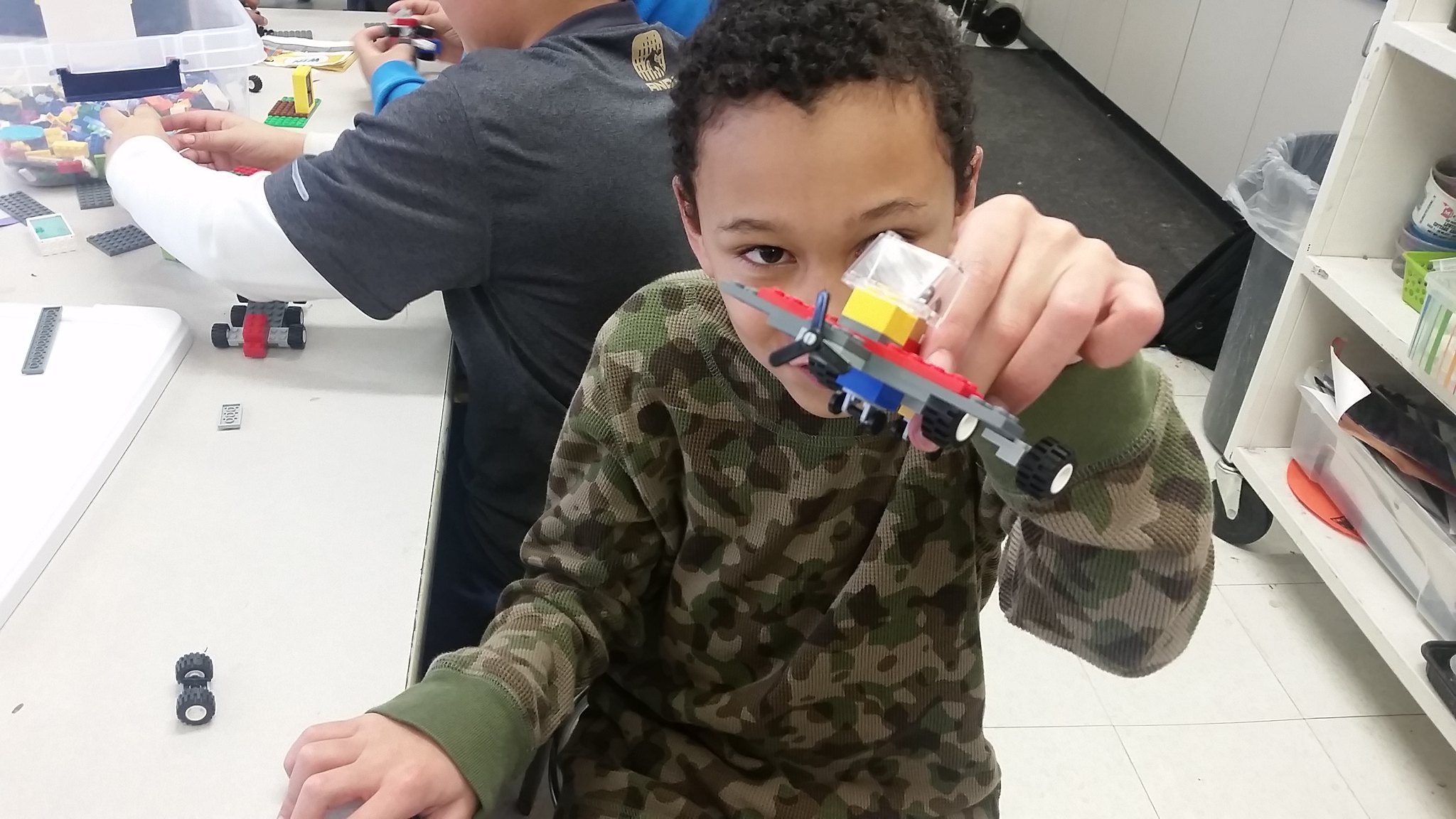 I know I can’t wait to see what this group will come up with in future weeks!

This week at Mitchell we introduced hand-sewing finger puppets, along with the same stations from previous weeks (Hour of Code, Dash robots, junk box, and construction toys). 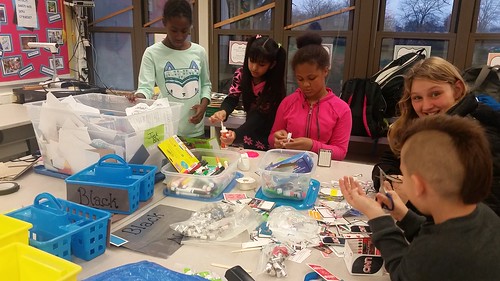 We had some more kids finish Hour of Code today, including two who had been struggling a lot initially. It was wonderful to see them finish yesterday. One boy in particular was resolved to finish yesterday, and powered through the last few levels. He was very proud of his success, and couldn’t wait to try out Dash as his reward! 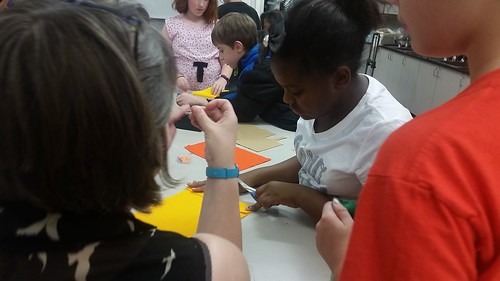 We promised that we would start hand-sewing, since we had some requests already, so this was out first week practicing with this group. We decided to start with something small, and came up with the idea of felt finger puppets. We were impressed not only with how quickly kids picked up the hand-sewing, but how meticulously they focused on their stitches. Some of the amazing creations included a turkey (complete with wattle!), a kitten, and a snowman! 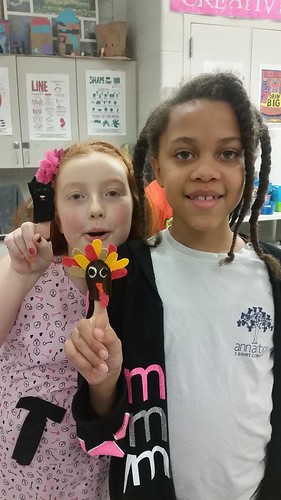 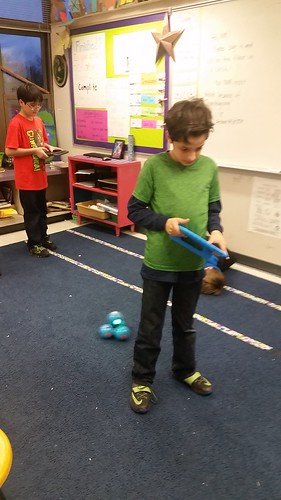 Making it work at Mitchell

This week at Mitchell, we brought back the same stations: Hour of Code, Dash robots, junk box, and Tinker Toys and Kinex. A lot of kids are getting pretty anxious to try out the robots, and we hope it will continue to motivate them to try their Hour of Code. 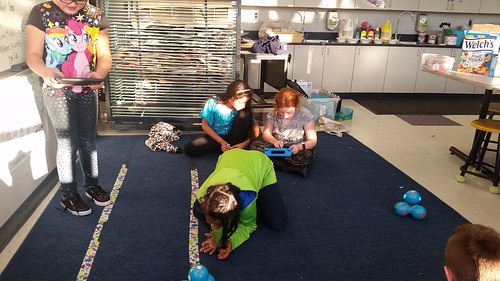 Several students have begun to enjoy doing the Hour of Code, and jump right into the puzzles. We also had a few more students finish the Hour this week! 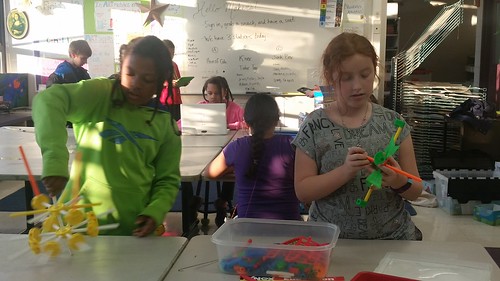 The real treat this week was to see what kids were able to build with the junk box. This week, I saw a lot of making of useful or functional objects. Purses were a big theme this week, as three different girls made different versions of purses from supplies in the junk box. 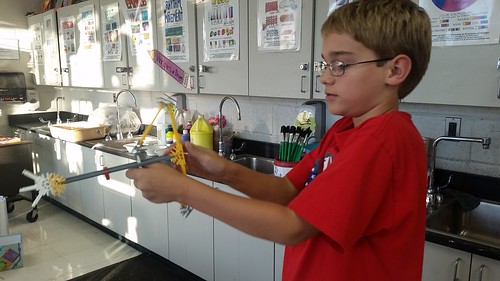 Last week, we had one girl make a “laptop” out of materials from the junk box, which inspired a boy to make his own this week using bubble wrap, playing cards, and a marble. As he described it to me, “You have to punch the keyboard really hard, but it’s really lightweight!” 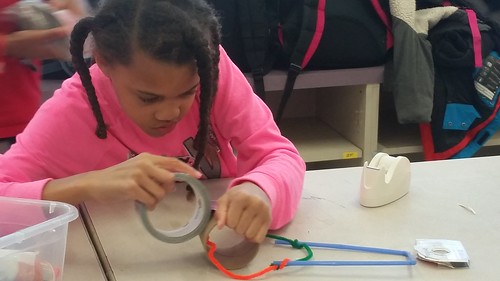 Slingshots and model bows were also a big theme this week. One girl made a slingshot out of a fruit snacks box and some rubber bands, complete with storage for her ammunition (small recycled cardboard tubes) 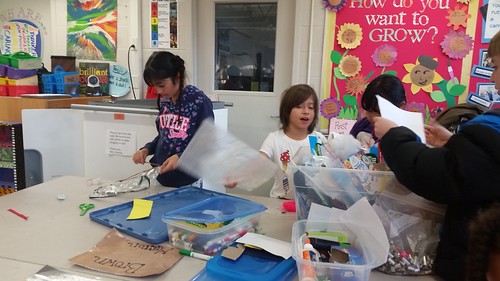