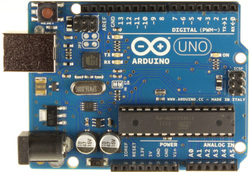 Arduino (pronounced Ar-dwee-no) is the name of a tiny micro-controller that allows people to become more comfortable with basic computer programming and hardware. For our last Michigan Makers workshop of the Fall 2012 semester, the Michigan Makers group worked with these awesome gadgets for the first time. Arduino is great because it’s simple enough that East’s sixth graders can grasp the basics, but it is also flexible and powerful enough to be used by professional programmers, designers, and robotics technicians.

For this first Arduino lesson, we introduced the hardware—the Arduino looks like a circuit board about the size of a deck of cards. The students recounted what they knew about circuits, conductors, and resistance, which they learned about in our Squishy Circuits workshop earlier in the year. Over half the group was able to raise their hands and build off of others’ contributions, showing me they already knew a good deal about how electricity moves and works. This knowledge would soon help them to make sense of why they needed to give the electricity someplace to flow through and to.

After talking a bit more about what people use Arduino for, including the Peruvian boy who set up an automated earthquake alarm system, we set the kids to attempting to unpack what swatches of code are designed to do. Working in pairs and always building off of each other’s thoughts and ideas, they tried to make sense out the previously forbidden territory of computer code.

The students uploaded a program that controlled when an LED light bulb, or light bulbs, blinked. They then altered the code so that the lights blinked at different times. Twenty minutes after looking at it for the first time, they were already controlling both the code and a strange, light emitting machine!

Our last challenge was for the pairs of students to cut and paste a chunk of code from the internet into the code that they had been working with. This was bit a tougher, because the students had to pay close attention to how the code fit together to make the lights blink.

After we finished, the students excitedly shared with others what they’d learned. It was particularly exciting to feel like they were coding and using a robot—something they hadn’t considered possible before.

The lesson was successful partly because we have a great place to work in at the school’s library, partly because the Arduino is such cool technology, but especially because of our big kid coaches, the ninth graders that are expert in Arduino and were so great at helping troubleshoot, help kids understand things, and even bringing in their own Arduino projects to show off. It is incredible to see all of the kids get so excited about this technology, because there are so many possibilities for applying the knowledge they are building.

These upcoming weeks, we’ll introduce Arduino to the other half of the group, but we’ll also give the students more time to work, incorporating sensors, buzzers, and more cool stuff for our young Makers to control.
-Terence