Have you ever wondered what the MM mentors do when they’re not at Michigan Makers? 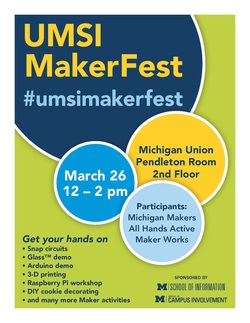 Haven’t you ever wondered what all the Michigan Maker mentors do while they are not with you? Attend and participate in awesome MakerFests of course! What is a MakerFest? A MakerFest is an event with a ton of different stations where people can around and experiment with the latest technology and create a lot of different technology related things. It’s basically a large scale Michigan Makers. And yesterday in the Michigan Union’s Pendleton Room, the Center for Campus Involvement and the School of Information put on the first-ever MakerFest event!

So what exactly was at this MakerFest event? Activities included:

As you can see a lot of cool things went on. Everyone was quite excited to test out Google Glass, so many people tried them that the battery died! There was also a station where event goers could learn about the all new Bachelors of Information that UMSI recently launched. Check out some photos below of all the things that were created at yesterdays event! 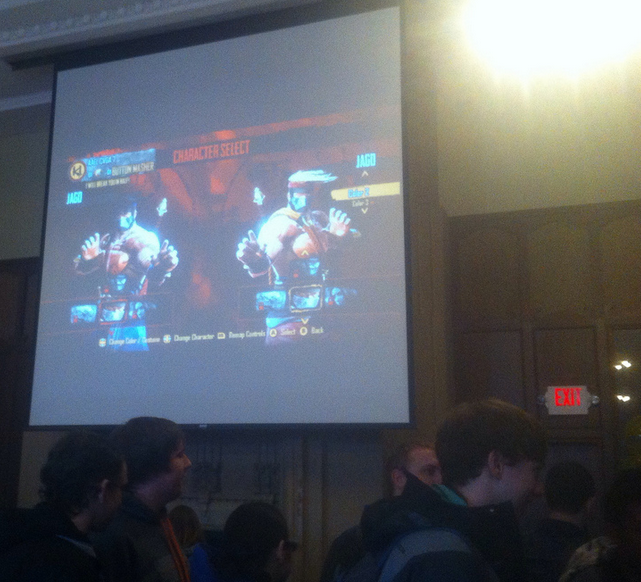 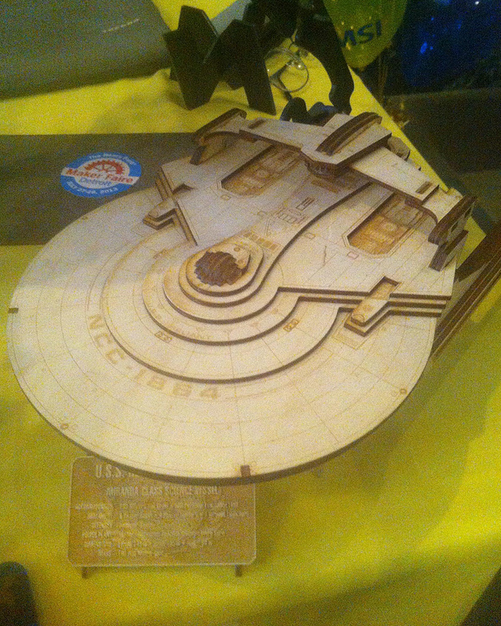 You can check out an awesome Michigan Daily article here that covers the event! And for more information on the School of Information’s new BSI click here! 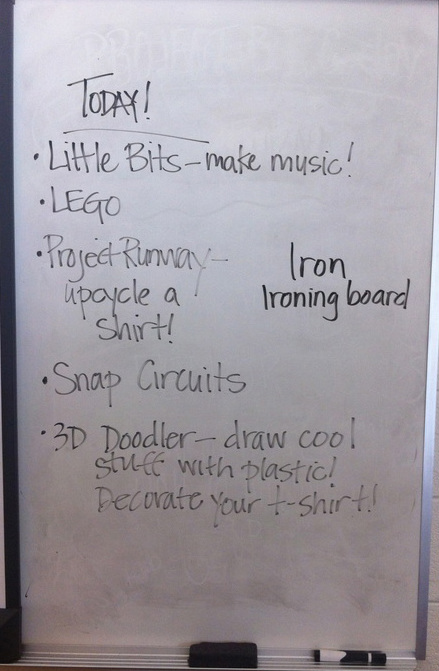 Hey guys! Last week at Michigan Makers we had some really cool new activities and brought some some favorite old ones. We had a “Project Runway” part 2 where we upcycled big shirts from the Salvation Army. We brought back some old favorites: Little Bits and LEGOs. But I think perhaps the coolest thing we had was a 3D Doodler! What is a 3D Doodler? Well it’s essentially it allows you draw in colored plastic. It’s kind of like a hot glue gun except plastic is coming out not glue and bonus it’s not hot to touch when it comes out! Check out the 3D Doodler station below.

Build with Chrome via kwout

Hey Michigan Makers! I know we haven’t had legos in a while and since we didn’t have Michigan Makers this week I thought you might be interested in Build With Chrome! What is Build With Chrome? Build With Chrome is digital lego building! It’s the largest Lego set in the world, you have the ability to change brick size and shape and color, it’s like building with actual Legos except on your computer and you actually have every piece you could imagine! Even better you can train to become a Master Builder and follow challenges the site has. As well as view creations users have made for a little bit of inspiration. We’ll be working with Build With Chrome in the future so feel free to familiarize yourself with it so you’ll be ahead of the game! It’s very easy and extremely fun. Simply click the interactive photo above to take you there, happy building!

Unleashing Creativity with Pixton : THE RESULTS!

Our makers have been hard at work these last few weeks working with Pixton to create awesome unique comics. Well now here are the results, you can officially call yourself author now. Take a look below at all of your hard work.

What should we bring next week?

Hey guys! There was no Michigan Makers this Monday(3/3/14) but last week you all answered what you would like to see more or and the results are in! Here’s what you can look forward to in the next coming weeks: 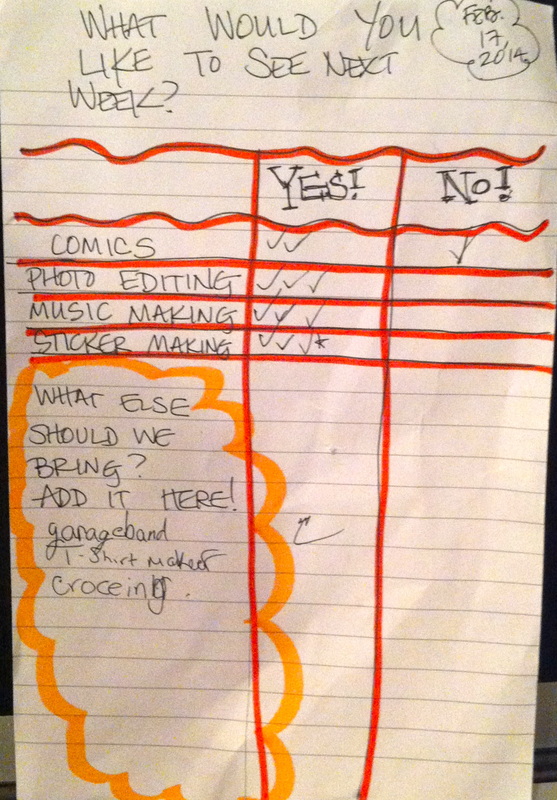 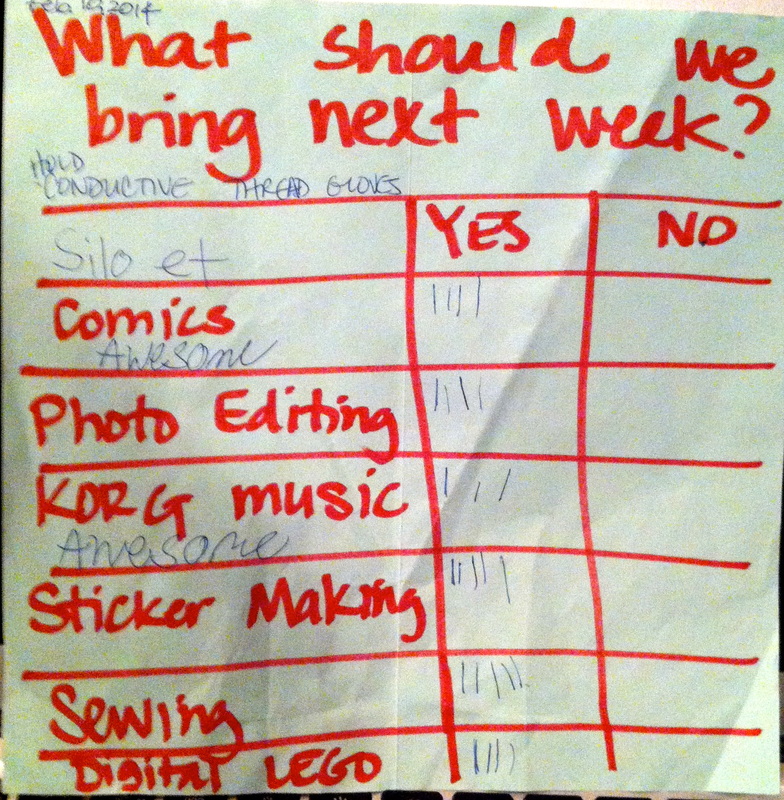 Good news, we’ll for sure be bringing next the Cameo next week and working on designing your own t-shirts! Start thinking of some super cool designs to put on them.

We had a lot of fun working with the Cameo last week. Last week(2/24/14) everyone started learning how to work with the Cameo Design Studio and got the hang of it really fast. We covered the basics of tracing images, adding text, grouping, ungrouping, and welding. We had two Makers create some awesome scary faces. You may recognize one of them as Jack Skellington from the film The Nightmare Before Christmas! 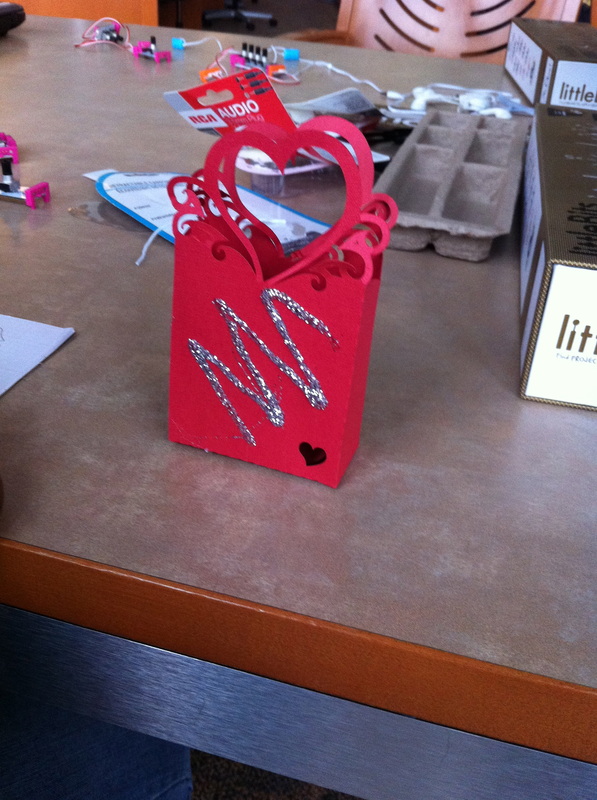 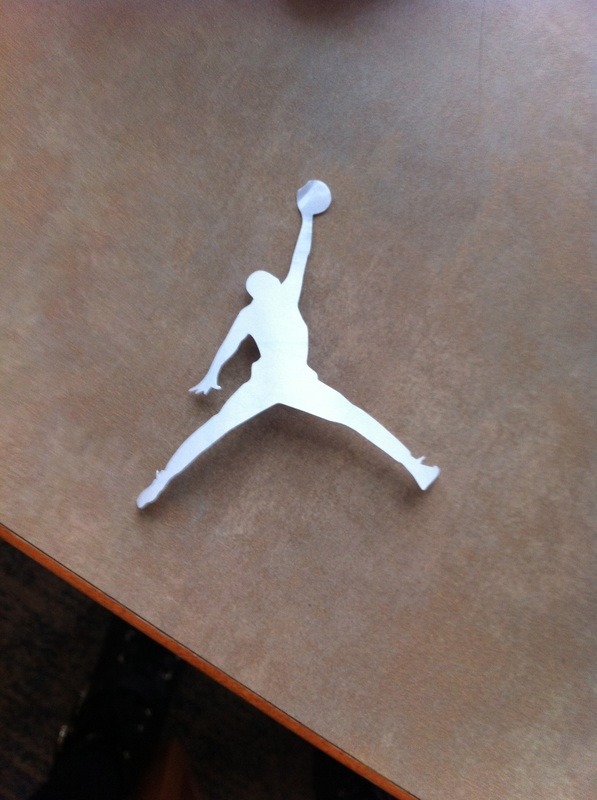 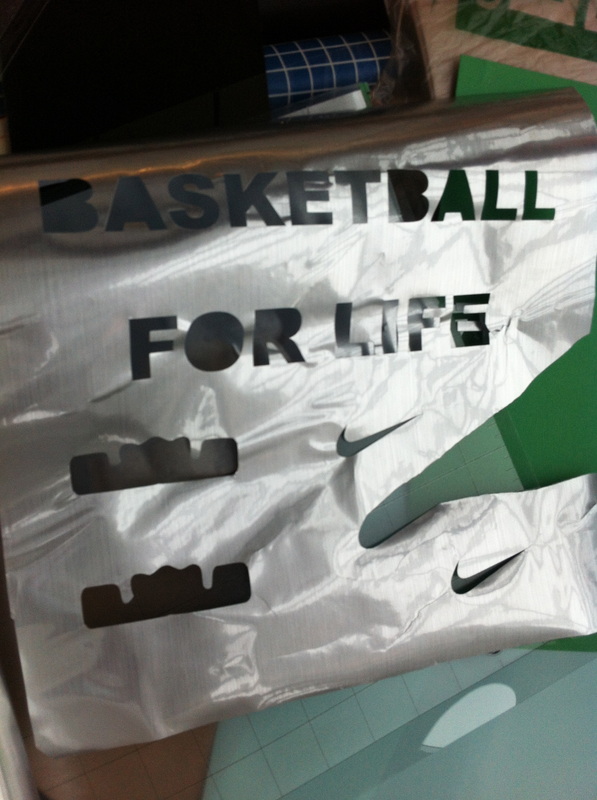 We made some awesome stickers with silver contact paper and the always fabulous Cameo again this week. There was a clear trend this week as all the boys went for basketball related. Everything from Nike and Jordan logos, to a “BASKETBALL FOR LIFE” sticker. Everyone had a lot of fun experimenting with different shapes and got to learn a bit more about how to weld, group, and ungroup objects in the Cameo Design Studio. 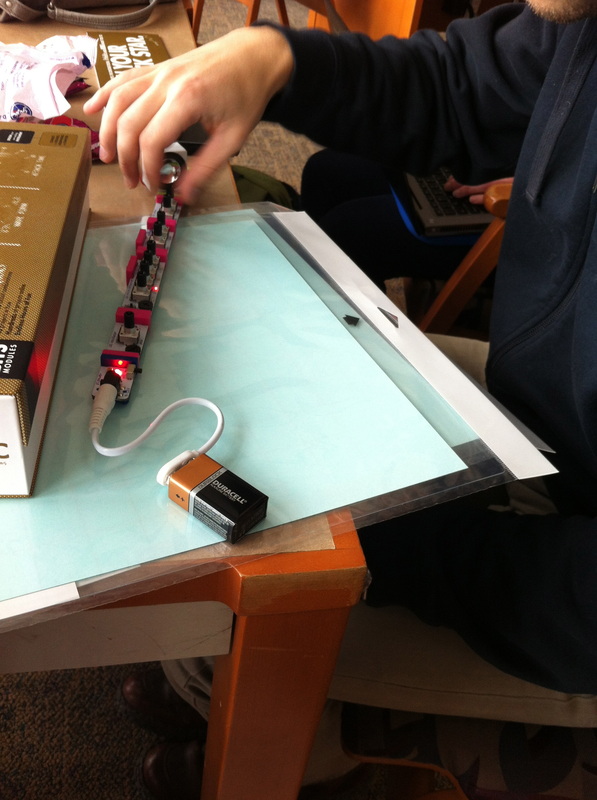 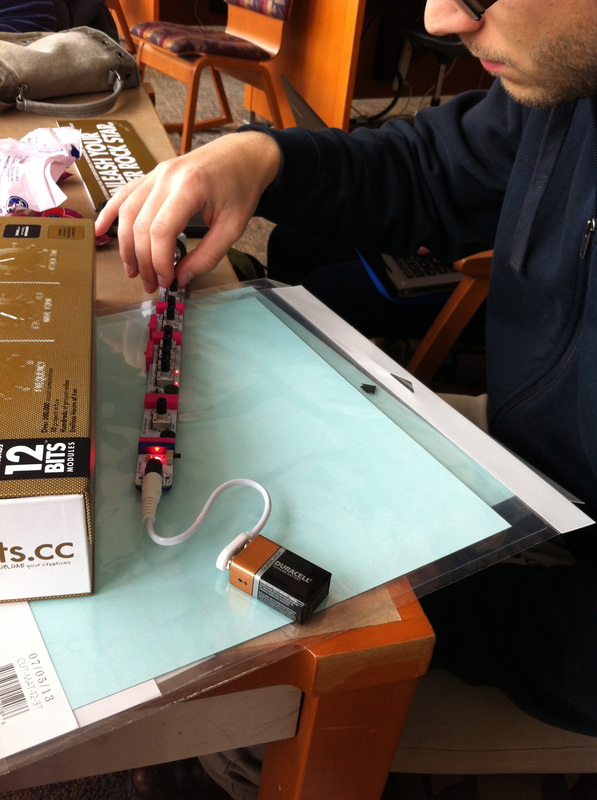 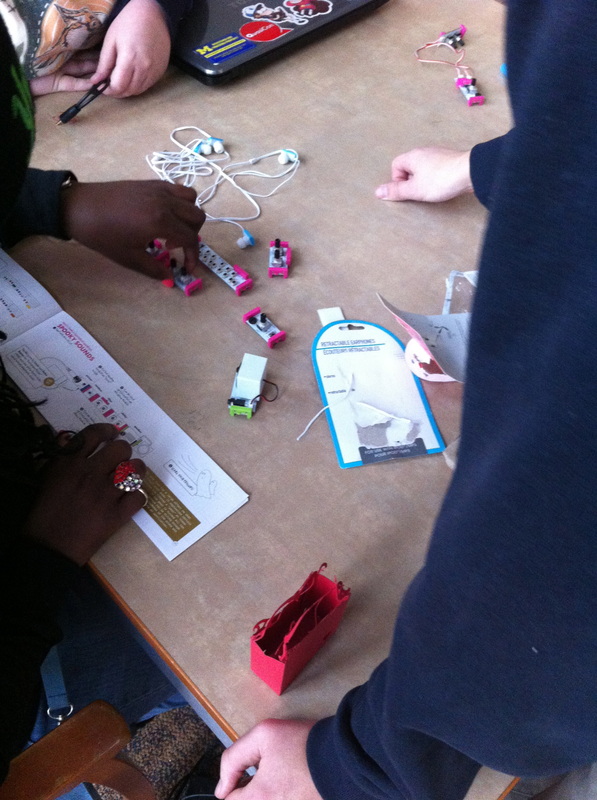 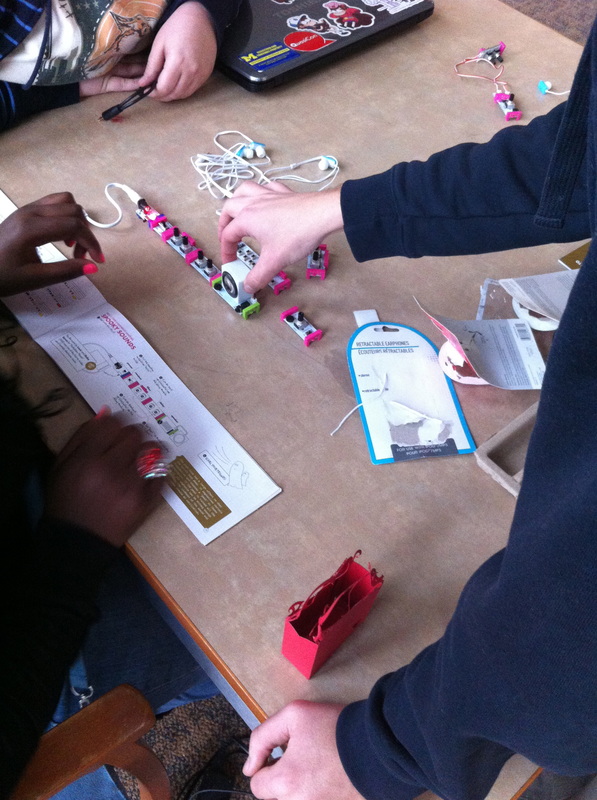 Everyone was bobbing there heads along as James and a few makers created some awesome tunes with Little Bits.

Dracula and vampires, what could be better? 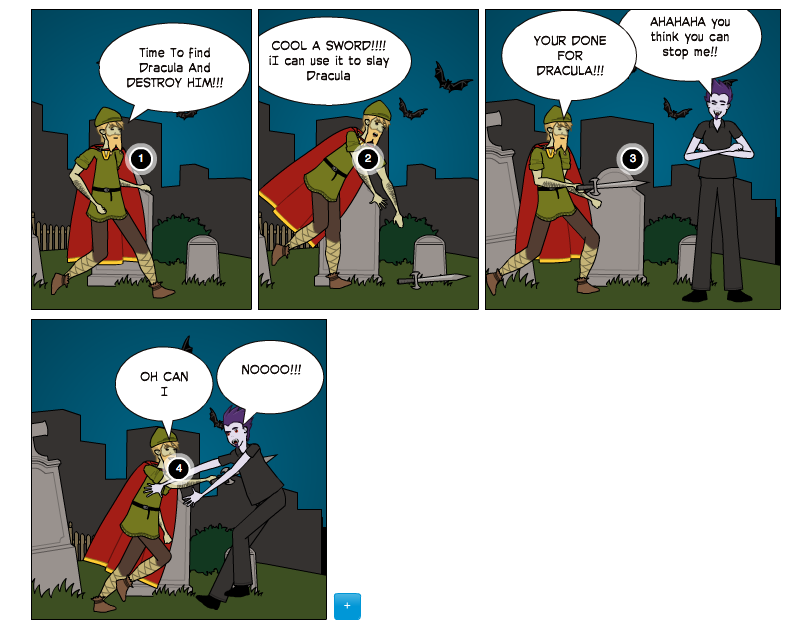 Check out this awesome comic above, one of our very creative makers made with Pixton last Monday!

Hello all, we had a lot of fun at Willow Run yesterday and best of all we saw a ton of new faces and some returning ones as well at Michigan Makers! We had four super fun activities to choose from:

The results have been tallied from last week and one of the top three voted activities was making your own comics! So this week we decided to introduce Pixton, a fun creative way to easily make your own comics online! Pixton allows for tons of customization so each maker was able to make their comic unique and put their own personal touch on it to make it theirs.

One of the other top three voted activities from last week was photo/video editing, so we had the makers experiment with PicMonkey! PicMonkey is an awesome free photo editor online. Not only did some makers edit photos with text, lighting, and overlays, but some made collages as well. And PicMonkey has the awesome feature of allowing you to start from a blank canvas so you can make your own design. Some of our drawing enthusiasts choose this option. 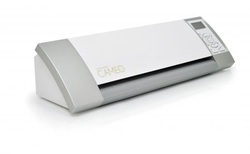 After being out for a while the Cameo is back is in action! I have three words for you: silver contact paper. And yes it was as awesome as it sounds. The makers printed out their designs on silver contact paper and made them into stickers, how cool is that! While we just worked with cutting out pre-designed objects this time, next time we’ll start having each maker brainstorm their own design and bring that to life on the cameo.